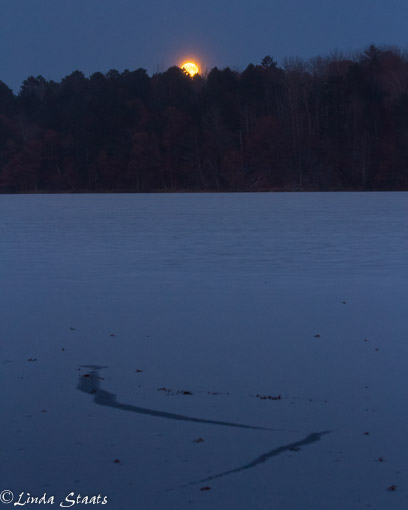 The cold has settled in and the lakes are freezing.  Throughout the day I watched the clouds and the snow move in.  The wind would pick up and blow the snow down the lake, forming whirlwinds of white skimming the ice.  As quickly as the snow came in, then the sun would come out.  The ice would creak and moan as the heat from the sun combatted the cold of the ice.  There were sub-sonic groans that pierced the air.  And then the cycle would repeat – snow then sun then snow.  But before sunset the skies cleared and there was a beautiful and quiet full moonrise.  It lifted over the opposite shore and trees and eventually directed its light on the snow-covered and ice-cracked lake, littered with leaves now encased in the ice.

2 thoughts on “A full moonrise over a frozen lake”