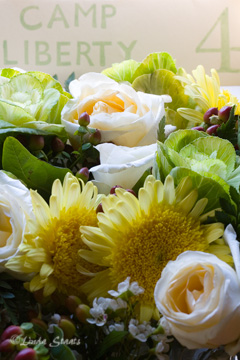 We had the happy privilege of having a wedding in the family this past weekend.  It was a time of joyous celebration and happiness.  The bride and groom are both in the Army, and met while stationed in Iraq.  Their time at Camp Liberty was eventful in many ways and even more so after they met.  Their dates consisted of meeting mid-base and sharing pizza.  His deployment was over before hers and he returned to the U.S., waiting for her return three months later.  They settled in Texas and continued planning their wedding here in Saint Paul.  The wedding ceremony was joyous and happy.  Both the bride and groom were surrounded by their parents, siblings, school and university friends, and military friends — many of whom traveled from across the country to share in the celebration of their marriage.  The toasts were heartfelt and the celebration continued late into the night, concluding with a wedding brunch the following day.  I wish them the very best in their marriage together.  There will be trying times, especially next year when she will be deployed back to Iraq, but I believe their love story will continue and with their commitment and love they will write their own happy ending.

One thought on “A wedding in the family”