It was early morning when I launched my kayak into the lake. The smell of fireworks from the previous night’s celebrations hung heavy in the air. There was no wind, no movement; the fog had developed overnight and was now suspended low over the lake.

This is my favorite time of day – the after dawn quiet when the world slowly awakens, before the rush and hurry of another 24 hours. I paddled as quietly as I could, rustling up some ducks that were gliding through the lily pads. Someone had recently been sitting on this dock, throwing their fishing line into the lake, and hoping for a bite. The rod was left leaning against the bench but at the ready for the return of the angler. Perhaps that person was waiting for the fog to lift.

It was still early in the morning. The red sun had risen and managed to shine its light through the smoke and haze that has blanketed our area. There were swallows sweeping above and over the lake, gathering insects, resting on the pontoon cover, then continuing their aerial acrobatics. Occasionally I could hear a bird off in the distance. But as I sat at the end of the dock, my attention was focused about 20 yards in front of me. A loon was gracefully floating by, intent on things other than my presence. It went to the south, then to the north, and then it dove under the surface. After what seemed like an unusually long time, it reappeared…with a snail and some greenery that it found on the lake bottom. It floated by me, turned, dropped everything from its beak, dove down again, and disappeared for another long time, only to resurface way out in the center of the lake.

I treasure these simple moments – the quiet of the morning, the birds, fish, and animals doing what they do in the early hours of daylight, and the ritual that has played out for decades and eons. And I try to imagine someone sitting by this same lake shore observing a similar moment one hundred, two hundred, maybe three hundred years ago. 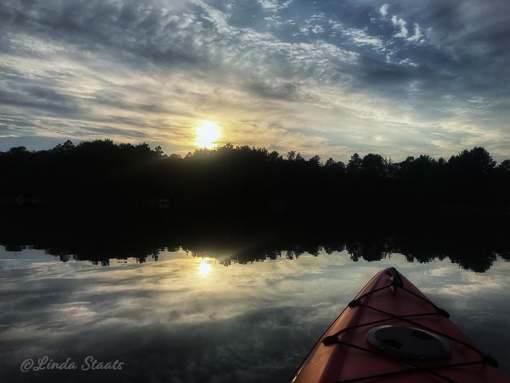 I recently purchased a kayak – nothing fancy, just a hard plastic one that I can take out on the lake.  I don’t have to worry about beaching it or scratching the hull, but it allows me to explore and enjoy the lake and the shoreline at an up-close and leisurely pace.

I’ve enjoyed watching deer and small fawns along the bank of the lake, turtles that are quickly diving into the weeds, fish that are swimming in the clear and warm summer water, eagles overhead that swoop down into the lake and rise again with a fish in their talons, and loons that cruise the lake then disappear as they dive for their meals.  I’ve been mesmerized by the still lake surface in the early morning when the water is like a sheet of glass reflecting the clouds overhead, the whitecaps that ripple across the lake when the wind comes rushing through the channel, and the quietness of evening as the sun descends behind the trees to the west while the moon rises in the east.

I will never grow tired of nature and all that it offers up to us, no matter the season. 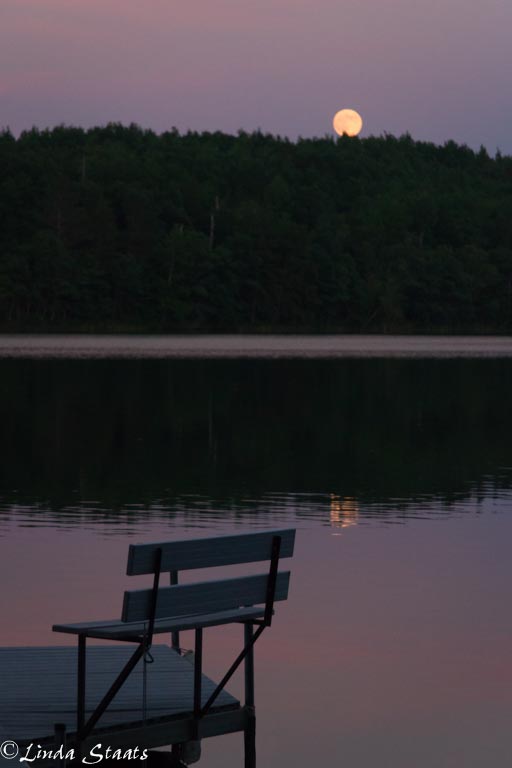 This past week there was a full moonrise – the strawberry moon, as it’s called.  Although I can’t attest to seeing a strawberry tint where I was, the moonrise was beautiful.  The sun had set, the wind had stilled, and the night air held the warmth and humidity of the day.  Slowly the moon rose above the trees on the opposite shore, clearing them and throwing its reflection into the lake below.  If you listened for awhile you could hear the cry of a loon.  And in the grasses by the side of the lake, the fireflies started to blink.  It was a beautiful night — just the kind we dream of during the bitter cold of winter.

A perfect summer’s day found us wandering amongst lakes in central Minnesota, north of Mille Lacs.  Blue sky, puffy clouds, a light breeze and a warm sun were all part of this epitome of summer.  As we were out on the water my eye became focused on the reflection in the water.  In one slow shutter-speed moment, the blue sky above was reflected in the surface.  White clouds streaming by lent their movement, and the darker gray and dark blue of the water itself gave a wonderful abstract.