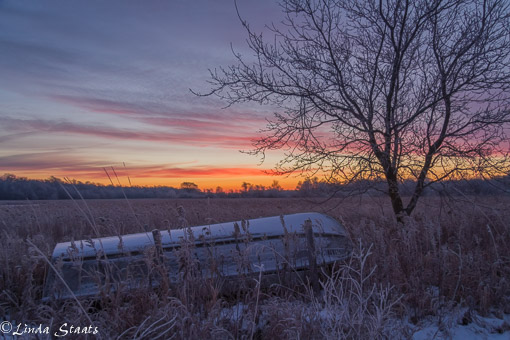 I’ve just returned from a weekend with a collection of girlfriends – time spent relaxing, sharing, and getting caught up.  We were outside of Alexandria, Minnesota in the central part of the state.  The seasons are changing quickly and while we have no snow in the Twin Cities, there is snow on the landscape in Alexandria where the temperatures have remained below freezing.  Gravel roads that once gave up dust are becoming hard and frozen.  Lakes are forming ice from the shorelines inward, and the progress is noticeable from day-to-day.  I awoke early this morning to photograph, and stepped out into a wonderland of hoarfrost.  The trees and vegetation were covered with frost – all outlined in white, and the colors of the sunrise shone on the eastern horizon as day was breaking.  A boat had been hauled out of the lake and was in its winter’s resting place, far from the shoreline.  In the distance I could hear geese as they were headed south in search of open waters.  The change of seasons was clearly noticeable this morning as we are moving closer to the heart of winter.

One thought on “Morning hoarfrost”