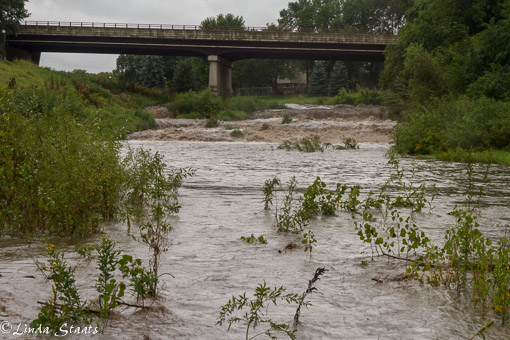 We wandered south of the Twin Cities yesterday on a dreary, rainy Saturday.  August has been unusually wet with heavy downpours occurring frequently, resulting in high rivers and standing water in many fields.  All this was noticeable as we drove through the countryside, but it became more apparent on a stop in the town of Cannon Falls.  Here, the Little Cannon River flows alongside and through the town.  In a “normal” August, average rainfall for Cannon Falls is four inches.  To date this month they have had close to double that – almost eight inches.  And with yesterday’s rain continuing to fall, it was obvious as the river stretched out of its banks.  The falls were roaring and tossing the brown, sediment-filled water into the air as it tumbled toward the Cannon River which then flows on to the Mississippi River.

2 thoughts on “Too much rainfall”