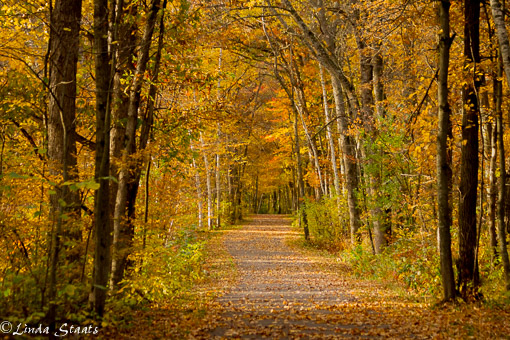 A week ago I made a quick drive north of Saint Paul to one of my favorite Minnesota state parks, Wild River.  Located along the St. Croix River, the park seems to always have some glorious fall colors.  On arriving before dawn, I made sure to be by the river as the sun rose over the Wisconsin bluffs to the east.  As quickly as the sun cleared the bluffs, the clouds moved in and the light changed.  After an hour of cloudy and gray skies, I wandered up onto the hillside and the main area of the park.  While walking down the hiking path the sunlight broke through the clouds for about five minutes.  Through the golden leaves on the trees, the woods were bathed in a luminous light that was ever so brief.  The clouds moved back in, the winds picked up causing the leaves to scatter along the path, and eventually the rain began. 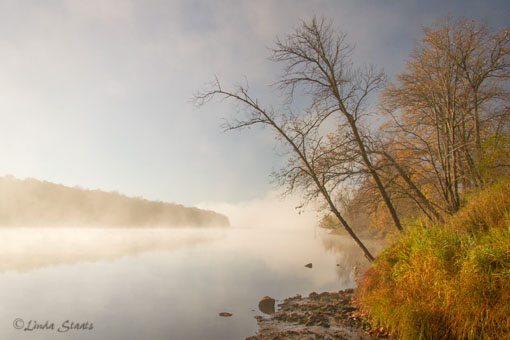 With my previous posts of fall I’ve shared some brilliant colors, and we continue to see those in our landscape now.  But there’s a quieter side to this season too.  This is the side that speaks of the upcoming change to winter, the coolness that is evident in the air, and the slow turn into the dark of winter.  We were at Wild River State Park early one morning recently.  The park sits along the St. Croix River which divides the states of Minnesota and Wisconsin.  It’s a lovely, and quiet area, especially in the morning.  The air was cool and yet the river temperature was still a bit warmer causing the fog to hang low in the river valley.  This layer of fog seemed to soften the sunrise, to quiet any sound on the river or land, and to soften the golds and browns that were evident from the seasonal change.  Eventually the sun rose high enough over the bluff to burn away the fog, and the light became much brighter and sharper, as did the sounds of the day too. 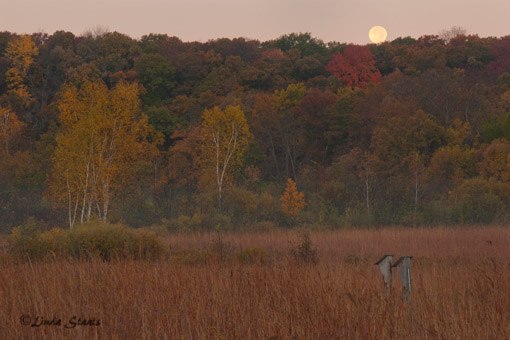 With delightful autumn weather forecast for the day, we headed out before sunrise this morning to Wild River State Park.  This Minnesota park is north of the Twin Cities and is located on the St. Croix River. Although there was the promise of afternoon temps in the upper 70’s, the morning had a cool feel to it.  We drove down to the canoe landing on the river and could see the fingers of fog stretching into the air and creating a veil over the fall colors on the Wisconsin shoreline.  As we turned the opposite direction facing away from the river, we were greeted by the full moon as it was making its way behind the hillside.  The prairie stretched out before us filled with golden grasses;  the birdhouses were empty at this early time of the morning.  The hillside was brilliant with the colors of fall – golds, oranges, reds – all in a hush before the sunlight brought them out into a blaze of bright color.  Silently we watched the moon descend behind the hill and turned our attentions back to the river, accompanied by the geese and the ducks that were flying by. 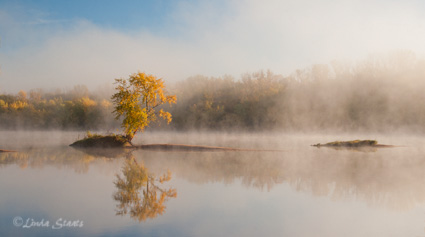 I had more than one reader ask about the foggy morning that I wrote about last weekend.  Each person said they wanted to see one of the photos that had gotten me so very excited about the early morning time that I was on the St. Croix River at Wild River State Park.  I’m pleased to say that I had a difficult time choosing which photo to post for my response as I had more than one “favorite” image for that chance morning.  But I narrowed it down to this image “Single tree island, early autumn” because it seems to sum up the whole morning.  The fog is hanging in the air and over the river; the water is still so as to show the perfect reflection; the tree and the opposite hillside are glowing with the colors of fall, and the sun is just burning through the fog providing some blue sky and some beautiful lighting on the tree and the island.  Within two minutes the scene changed — the sunlight was harsh and the fog had disappeared for that morning.  I realized how fortunate I was to be at this place at this time on this morning.  (And on another note…my lost cellphone was turned in by an alert hiker who found it along the trail near this very spot.  Perhaps I was too caught up in my excitement over these perfect photographic conditions that I was unaware of other things such as cellphones.) 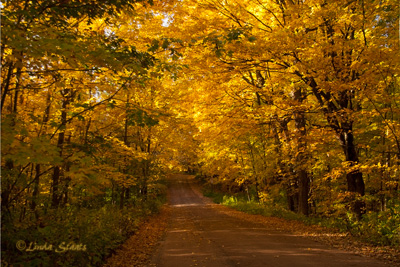 Autumn is quickly spreading across Minnesota, starting in the north and moving southward every day.  Saturday morning I left the house before dawn and drove north to Wild River State Park, a beautiful park located right along the St. Croix River.  The morning was cold with frost and blue skies, but as I approached the river valley I could see a thick blanket of fog hovering over the water.  I quickly parked, collected my camera gear, and headed along a trail that follows the river.  In the stillness of the morning with the sounds and sights muffled by the fog layer, I enjoyed a delightful hour of fall colors.  All too soon the sun burned through the fog, the temperature rose, and the wind picked up.  I was delighted to see a bald eagle soaring high overhead, and later a deer ran by, obviously hearing my approach before I had even seen her.  The time passed quickly amongst the golden leaves of the forest, and when I returned to my car I realized I was missing my cell phone.  It must have fallen somewhere along a trail (or maybe even into the river).  I reported the loss to the park staff and drove home with the hope that someone might find it or it might become a new treasure for someone’s geocaching trip.  As the remainder of the day wore on and no word on my phone I mentally retraced my steps and thought that I might have dropped it near the front of where my car had been parked.  So this morning I made the pre-dawn drive back to Wild River State Park, only this morning was a completely different scene.  The night had been warmer, so there was no frost and no fog – only the bright sun as it crested the bluffs on the Wisconsin side of the river.  I searched the parking lot to no avail, but took the opportunity to hike another trail further north in the park.  With the bright sunlight the trees were glowing in their shades of yellow and gold.  I appreciated the contrast between the two mornings and remembered that scenes and places are never the same, even when separated by only 24 hours.  I have since replaced my cell phone, and I am not annoyed in the least at the “reason” I had to visit the park on two consecutive beautiful fall mornings.